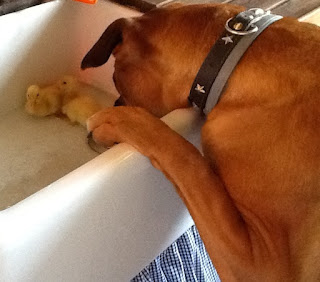 Today the ducklings went in the kitchen sink for the first time. Just a little warm water. Bruno was fascinated by them. I put them in again this evening with slighter deeper water but they could still stand on the bottom. They were diving under the water and shooting along underneath. Very comical to watch. They did a lot of preening too which is good as that will get the waterproofing oils going. I will now give them two or three swims each day. They are two and three days old now! They have already outgrown the box and are now in one of my big plastic craft boxes. This has steep sides so they will not be able to get out. The three day old duckling already has the beginnings of wing feathers appearing. I had forgotton how quickly they change. It is a privelege to be able to raise them like this.
Yesterday I had a good sort out of cluckingham palace. The Old duck house has gone. I have put a ladder  in for them to reach the beam which they like to perch on. Most of the hens and one cockerel worked out how to use it but the two big boys had to be lifted up! Hopefully tonight they will all manage it. I also turfed out broody hen as her house smelt awful. She had broken an egg which had coated the others along with chicken poo. I had to throw them out. I cleaned the house and once she had gone back offered some new eggs. She rolled them under her and has been sitting ok since. In about three weeks if the eggs are fertile some chicks should hatch. I love looking after the poultry.
Generally things are ticking over well which makes a change.
Posted by Aly at 11:53

Aly
A self confessed townie now a country bumpkin. Learning to respect our planet and make a difference in my corner of the world. Long time vegetarian who detests the exploitation of animals. I accept they are there to be eaten but not for our profit.. Trying not to support big corporations.